Funko has announced a new line of Vinyl collectibles called Vynl. Yes I spelled that correctly, Funko says there is no “I” in Vynl. for a reason, and I will get to that in a moment. These are adorably stylized figures that don’t appear to have much articulation if any at all, but are designed similarly to the mystery minis. They measure at about 3 3/4 inches tall so comparable to the size of a Pop!, Funko will be releasing a size comparison post soon. The bodies are square-shaped and the heads are large and the gimmick with this line, is they always come in a pair! The releases will be two pop culture icons that have a connection in some way to one another and that is why there is no “I” in Vynl., because there will always be two in a box. The first release will be at San Diego Comic Con with an exclusive Bat Girl and Poison Ivy. Following that duo shipping in October will be Freddy Kruger and Jason Vorhees, Sally and Jack Skellington, and He-man and Trapjaw. Those three sets can be pre-ordered by clicking on the image below.

We will get you more information as it becomes available on the size of these collectibles and any more information we learned. So far all we know is they are keeping with their pop culture themes, releasing them in sets of two, and already starting the toy collecting controversy. Some fans are feeling frustrated with “too many toy lines” and urging Funko to “Fix the production quality of Pop’s before they release a new series”. What are your thoughts on this new line of collectibles from Funko? 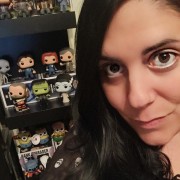