After bringing you guys the Dorbz, the Hero Plushies, the Rock Candy, and the Pint Size Heroes, it is time for Funko’s main event, the Guardians of the Galaxy Vol. 2 POP!s. The first Guardians movie was one of Funko’s first steps in making a wide range of characters as POP!s, even getting to The Collector & Howard the Duck. This time around, there are 14 currently announced POP!s, with 5 of them being store exclusives. On top of that, the mass retail release of Star-Lord will have a chase with his helmet on. They are due out next month, and can be pre-ordered by clicking the images below!

Now, the round out the exclusives. Groot in flight suit & shield will be at Hot Topic, Masked Star-Lord will be at Toys R Us, Rocket with 2 guns will be at Gamestop, Groot in his flight suit will be at Walmart, and there will be a 10″ versions of the mass release of Groot showing up at Target.

If you are as good at counting as I am, you will notice that #205 & #211 are missing. Perhaps they are a character that will be revealed later, due to spoilers. Or maybe they will be in an upcoming Collector Corps boxes? We should know more soon enough! 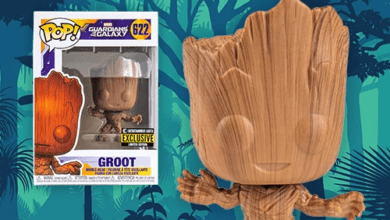